It sure wasnt easy saying goodbye today! We had such a great time that if the vacation was over tomorrow, wed have nothing to complain about. A HUGE Thank you to our hosts! They opened up their home and welcomed us in with open arms. I cant wait to come back for another visit. We love you Pat and Megan!

We headed out to Tampa and crossed Alligator Alley. I was sorely disappointed that I didnt spot any gators! Not that it was easy passing through at 65 mph, but they could have been out sunbathing or something, ya know! We didnt want to stop because we had a game to get to, so maybe next trip well get a glimpse. Id also like to go on an air boat ride as well, and get down to the Keys, and watch some jail alai, and sample some Cuban food well be back! I was amazed at how the terrain changed so quickly from lush tree lined streets to marshy swamp land in a flash! Suddenly there wasnt a tree in sight! Being up high in the RV lends a great view vantage point, so one can see for miles in all directions. And there was a waterway that seemed to go the length of the roadway through the area. I dont know if it does, but it sure looked like it.

We got to Tampa just in time to find the campground, check in and then head for the game. 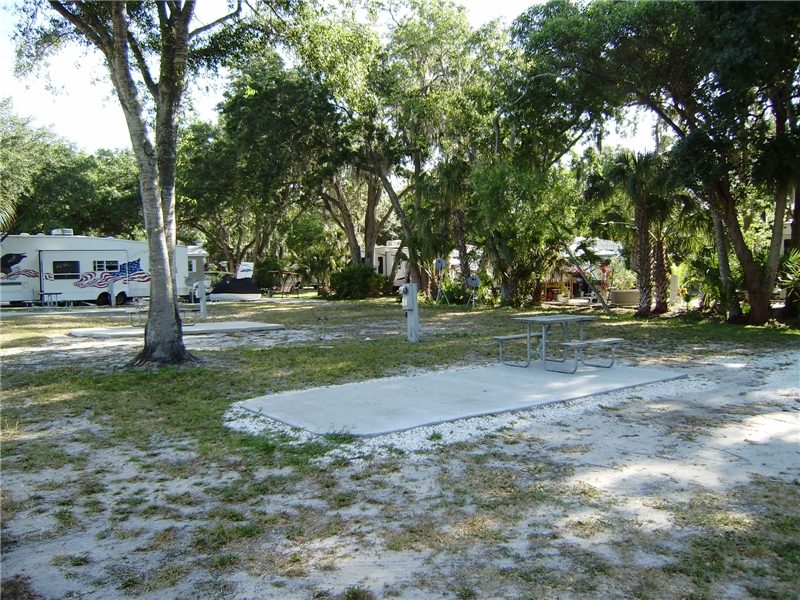 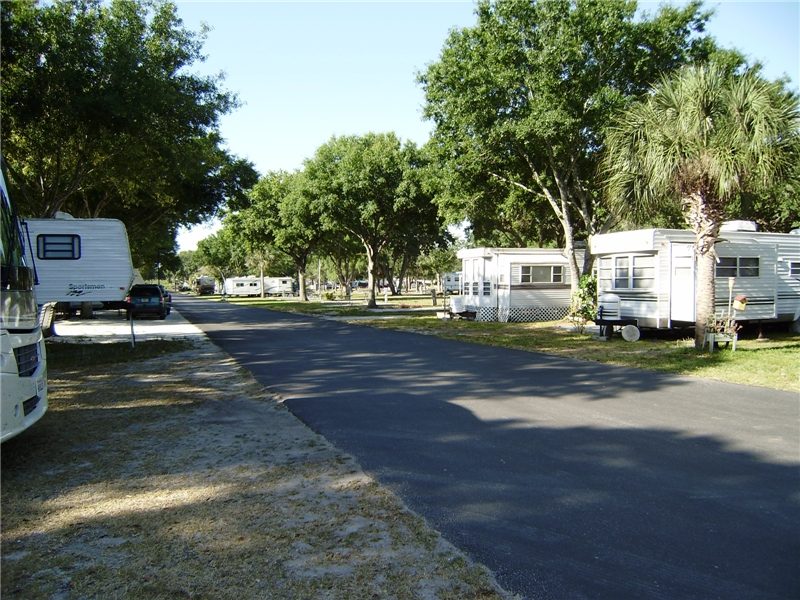 We drove the RV instead of renting a car, which proved to be very cost effective as the bus/RV parking was just outside the perimeter of the park and was free. They even had event staff walking the area, so it was also quite safe. We were surprised that there wasnt a drop of humid air here! It was nice and warm, with a cool breeze lightly blowing. Now this weather I could get used to! Rick was in 7th heaven!

Tropicana Field is amazing! First of all, its an odd shape, so it looks like a flying saucer as you approach it. 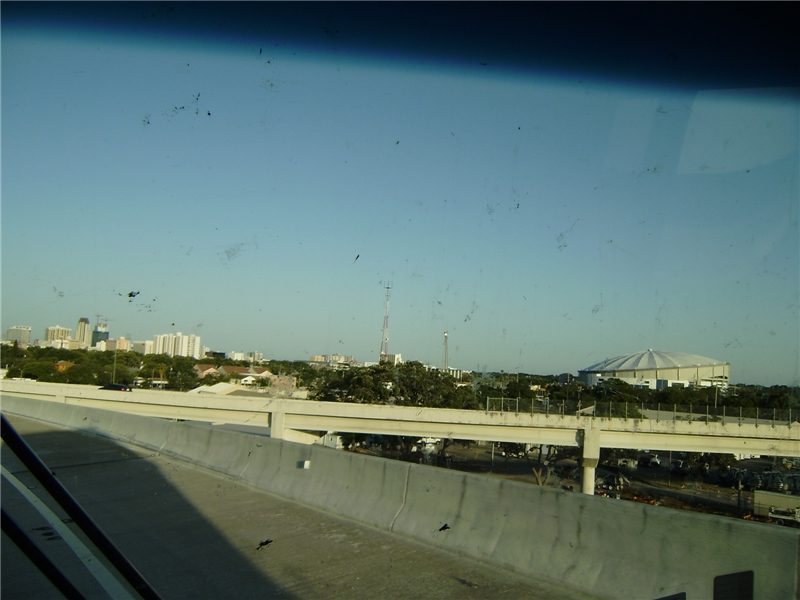 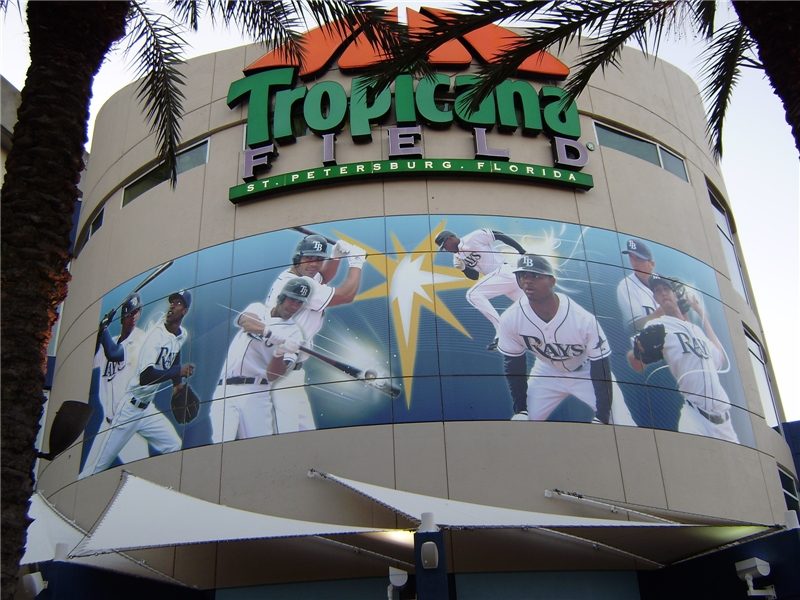 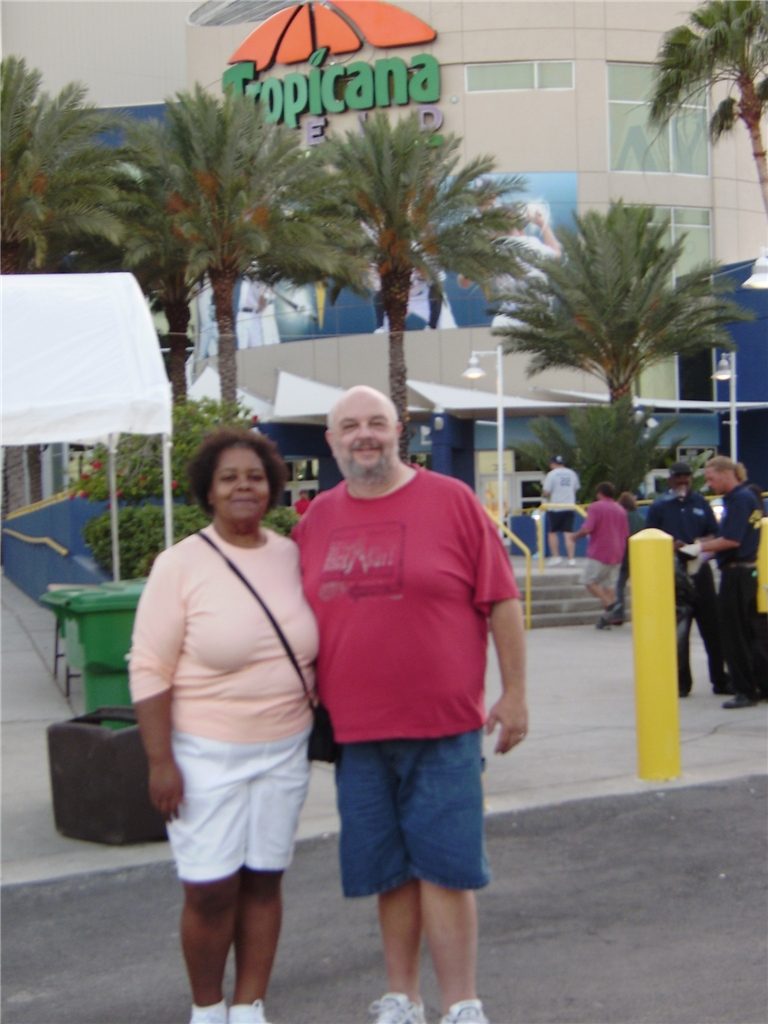 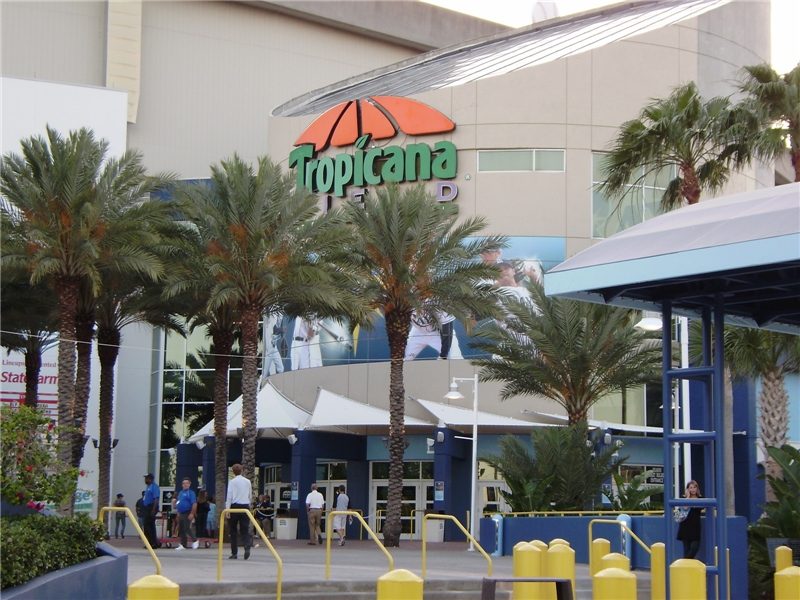 Its also an indoor stadium, so walking in is like entering an indoor mall. 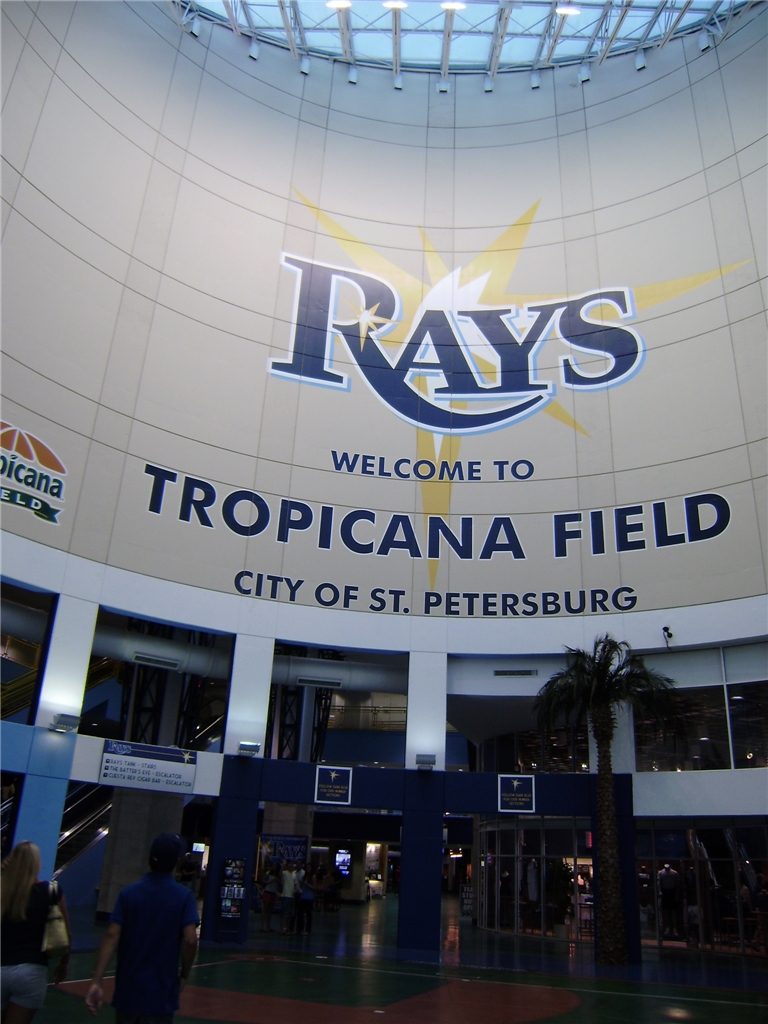 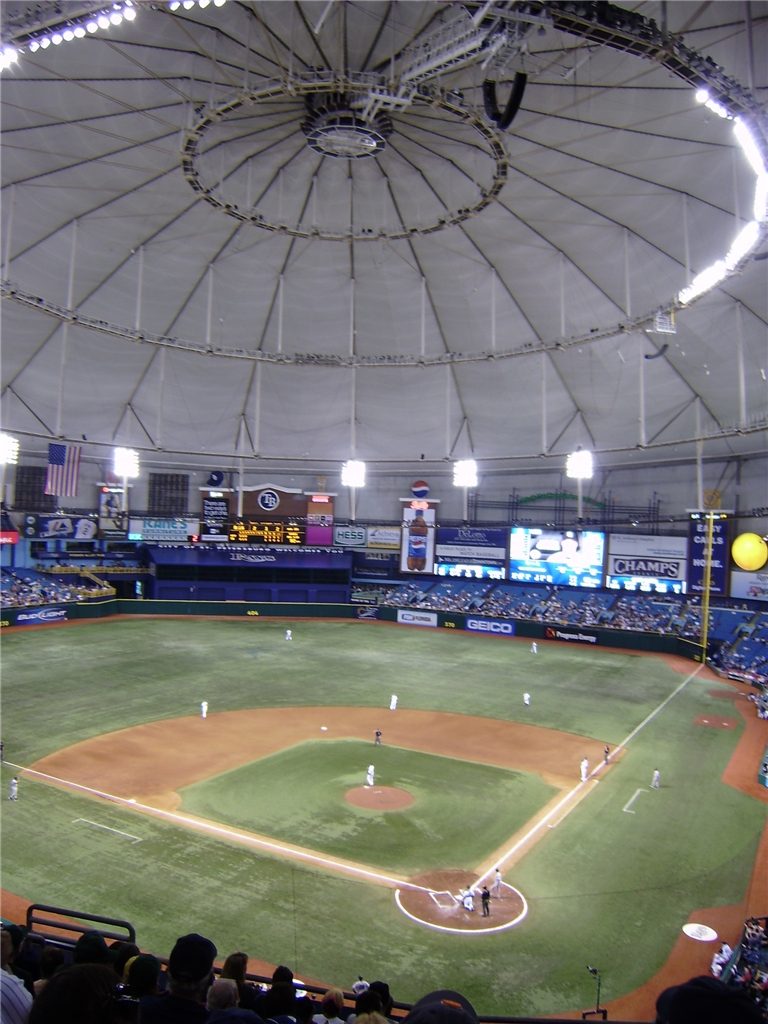 They had all the required things weve seen in the other parks, like batting cages, pitching mounds to try your hand at it, team store and all the eateries one could want. They have lots of seating where one can watch the game while eating at a table, something usually only found at the club or in boxes at other parks. Also unique at Tropicana is the cigar bar and the Devil Ray tank. Yes, they have actual, live rays in a tank that one can pet. Needless to say its a huge hit with the little sluggers! 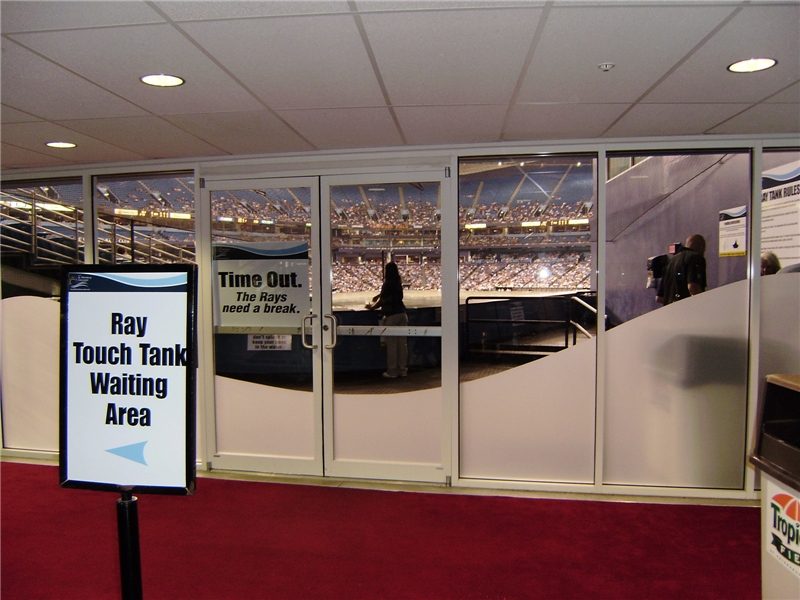 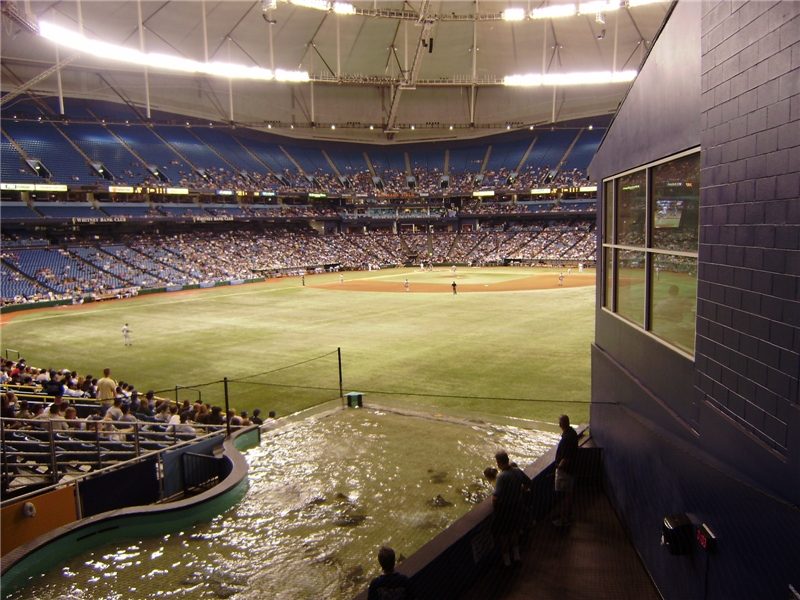 It was closed to give them a break when we passed by. I got a hot dog as we walked to our seats. Ive learned that I can eat and walk it off at the same time, thus allowing for the purchase of the next tidbit before we sit down. I know but its a system that works! The dog was really good, and now holds the #3 spot behind Phoenix and Anaheim. No garlic fries available, and the turkey legs looked a dry, so I passed. There was a Cuban food stand but I decided that my first venture into the cuisine should be at a restaurant, not a ballpark. I dont want to taint the first impression (I hated tamales for a long time having been first introduced to the canned variety. Ick! I missed out on a lot of good homemade ones because of it) Our seats were great, behind home plate. way up high. 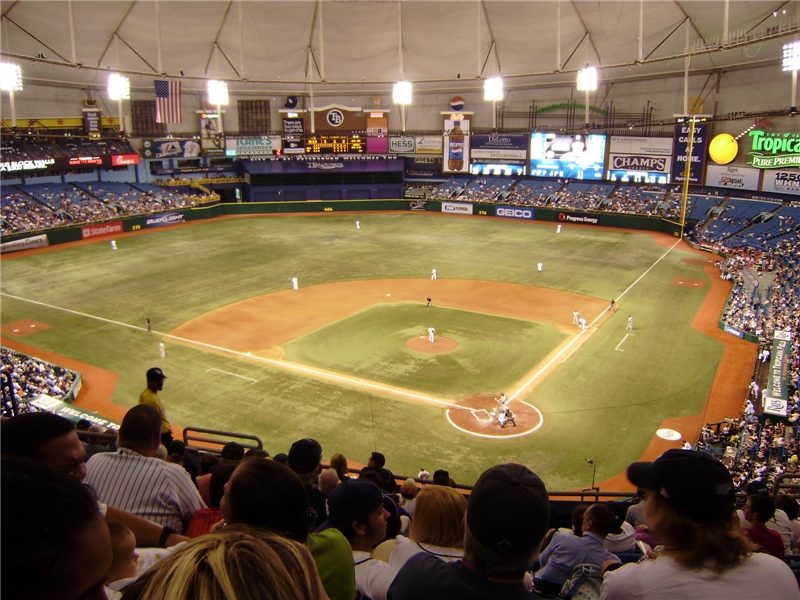 There werent many people there, but they sure made a lot of noise! It seemed to be evenly Rays fans and Yankees fans. (A-Rod didnt play, but I got my fill of man pretty watching Derek Jeter. Mmm mmm mmm mmm mmmmmm!) The Rays just beat up on the Yanks, and the game was all but over by the 5th inning. Ive never seen the Yankees play so poorly. Rick was elated, to say the least, since he has this deep seated hatred of them. He enjoyed the game immensely. We got up and walked around largely to get away from the people behind us who never shut up once we sat down. No really, I mean they talked non-stop! And of course the conversation wasnt about baseball, and delivered in the heaviest Southern drawl weve heard since being in the south. I love the drawl, but damn, take a breath! It was a mixture of males and females, Black and White, so nothing racial or anything, just long-winded stories about hair salons and jacked-up trucks. We headed back over to the area in the outfield by the ray tank. It was closed again, so I didnt get a chance to get up close and personal. Another cool thing at Tropicana is they have strobe lights that circle the inside, and light up to the drum beat, like with We Will Rock You. Its the neatest thing to see about 200 of them in unison with the music (I told you before, I am easily amused.) We got our souvenirs and headed back to the rig. The glow from the stadiums fabric roof was so cool, and made it really look extraterrestrial! The fact that its also at a slant helps the image even more (I dont know why I didnt think to take a pic of it as we left. My bad!)

Tomorrow we start up the eastern seaboard fro the Washington, DC area. I cant wait to see the Kennedy Space Center and Savannah, GA.

12 tourist places of Pinal de Amoles, Queretaro you should know

Pinal de Amoles is one of the 18 municipalities of the state of Querétaro, in Mexico. In Pinal, the so-called Read more

Checking out this travel site!
Cheap Hotels in Bali, Indonesia