We went sightseeing today at San Diego Harbor. Theres so much going on and yet, unlike San Francisco and Oakland, its so beautiful. Im sure that being there on a weekday had something to do with it, but its also evident that someone kept a mind to making sure it wasnt just for the tourists or just commercial space. It all coexists so wonderfully and seamlessly at least to me anyway.

We took the 2 hour harbor cruise tour. There was a group of seniors with us that were on a planned outing. A few of the men had on the requisite hat from the respective war they had fought in. My thoughts immediately were of my father, and how proud he always was of his military service, and how he would also be wearing one of those hats. Army Air Corps, Tuskegee Airmen, Vietnam, he could take his pick, he had them all. I was hoping to be able to hear some commentary from some of them, but they didnt seem to be into telling stories. Their wives had probably warned them not to, having heard those tales time and time again, but I realized that I really missed them. It was so interesting to have my Dad give a first-hand account of something I read about in a history book, or better still, something not found in the books. Those side-bars that one only gets when one has lived through the era, or some historian has actually written a thorough account.

The security in the harbor has been beefed up since 9-11, so we couldnt get very close to the big ships, but we were close enough for comfort. Those big things are so massive! Rick and I laughed when we saw one that was much smaller, and both remarked at how tiny it was. Yeah, tiny like a behemoth! The history of the USS Midway is amazing. She was in service for 50 years, and saw action in some of the most historic events of our day, including evacuations of whole areas, peace-keeping and humanitarian aid. Over 250,000 people served on her during her time. She could hold a crew of 5,600 people and over 85 aircraft. Her longest deployment was 366 days at sea. A year at sea! Eeeek! 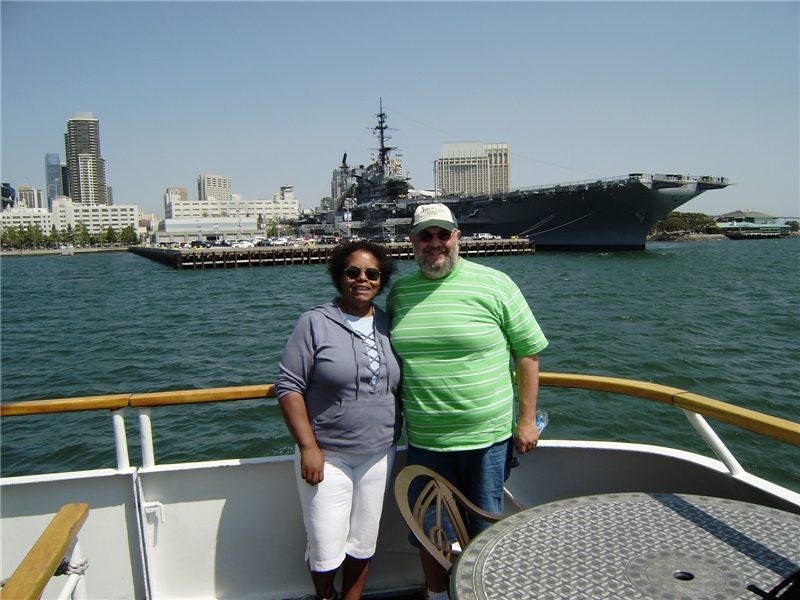 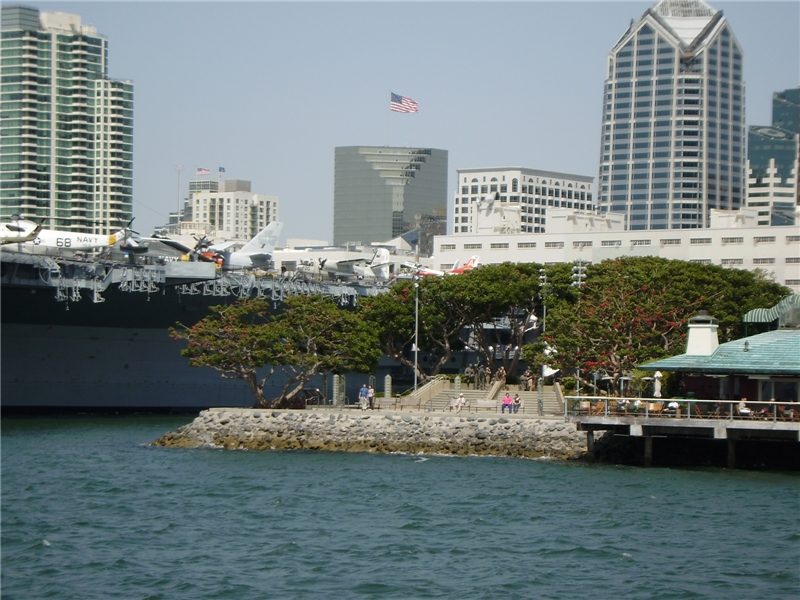 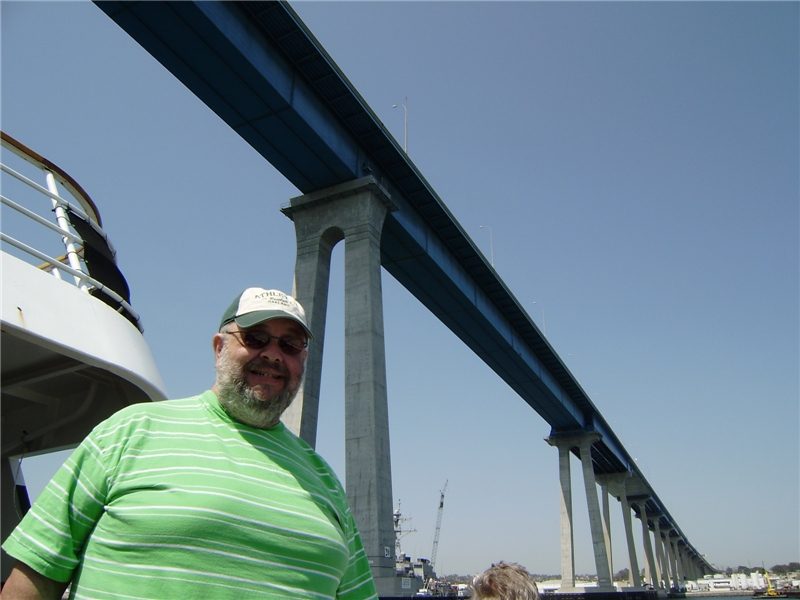 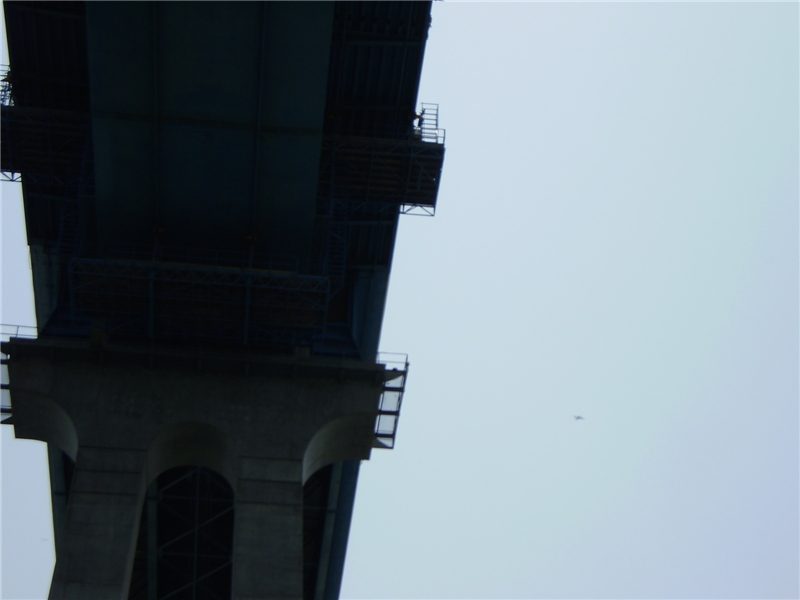 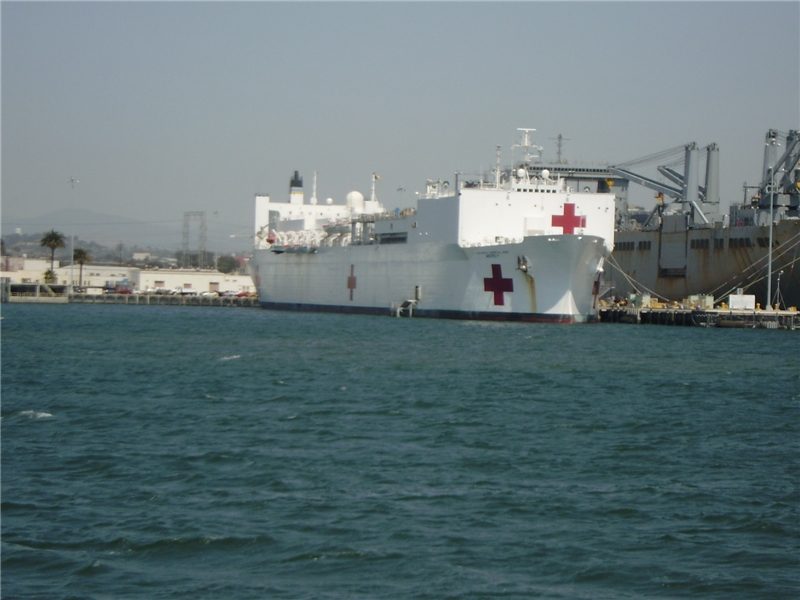 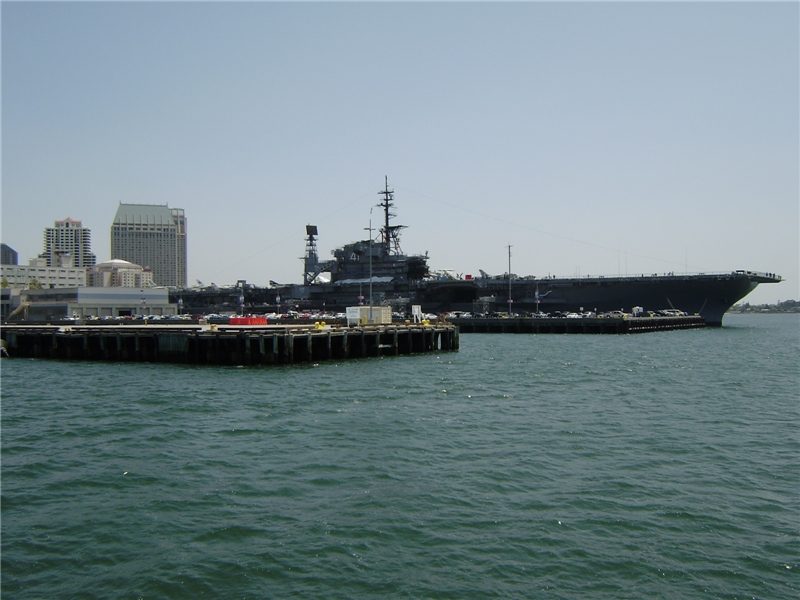 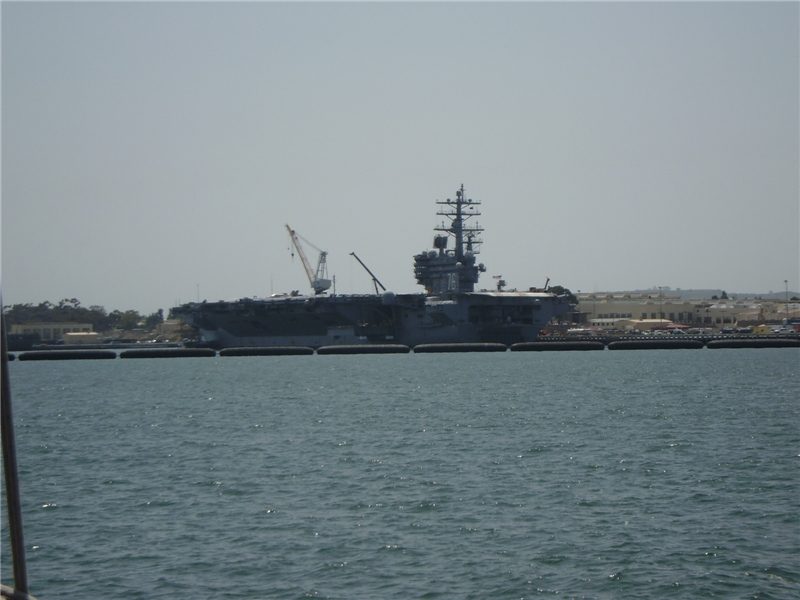 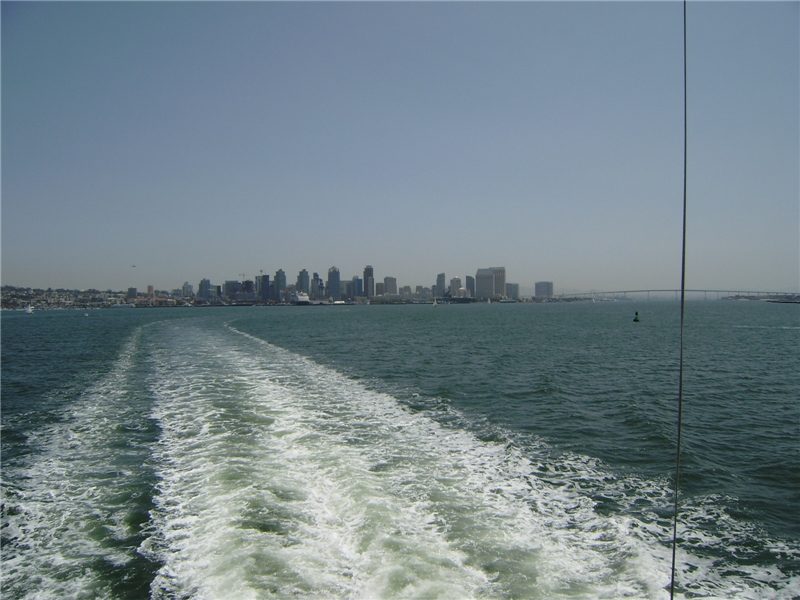 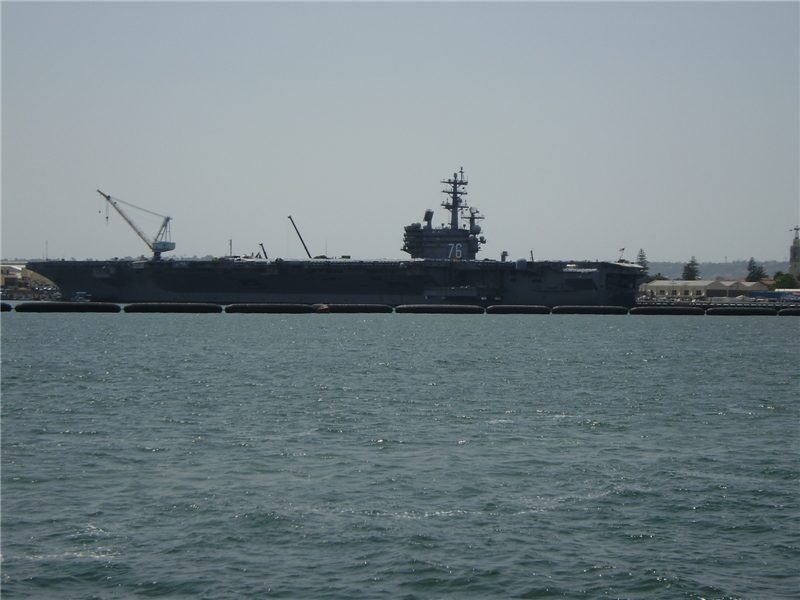 We headed to Phoenix today on I-8, a road Ive never been on. What an interesting drive through mountains and desert. We went through the Cleveland National Forest and came out in a valley where there were rock fields everywhere. Ive never seen anything like it before. Fields and fields of rocks of all shapes and sizes, as if someone had been dumping them there for years. No dirt, no trees, no vegetation of any kind, just rocks! I thought back to my geography classes and tried to imagine what happened there. Some of the rocks were smooth, representing river action, and in some places, there was evidence of massive uplift where you could see the layers of rock pushed up skyward. When we get to Phoenix Ill be googling the area to find out for sure. Mother Nature is just awesome! For all we try to copy her, she outshines anything we can come up with! Maybe because she takes her time and isnt worried about the bottom line. 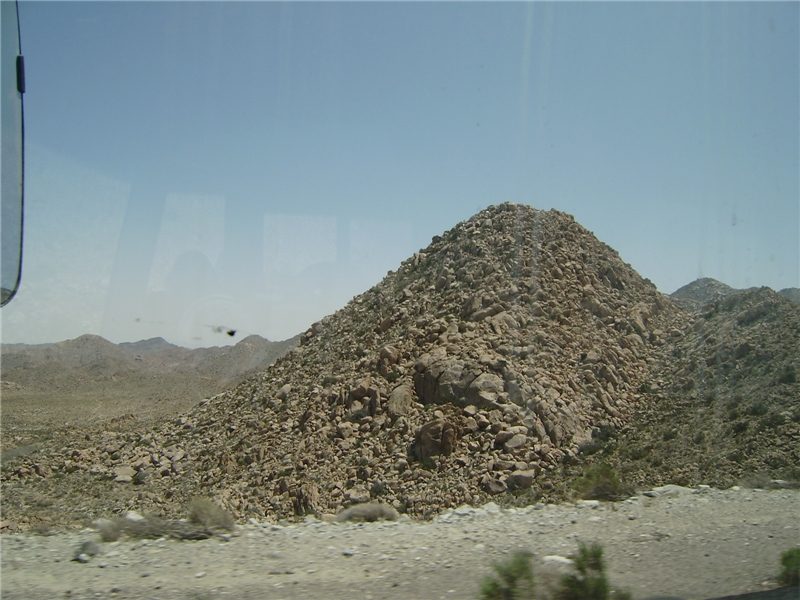 As we skirted the Mexican border I was suddenly struck by the immense determination one would have to have to cross the area on foot, or endure the ride in the back of a truck, to get into the US. I cant imagine the hardship it would be, and the desperation one felt to leave their home and try to get to the land of opportunity. I wonder how many actually understand the dangers theyll face during the journey. It made me very sad.

Once we entered Arizona we were stopped at a border check. The guard was very friendly and jokingly asked how many illegals we were transporting. Rick later told me he had thought about joking back by saying Oh illegals. I thought you were going to ask me about the kilos of weed in the back I would have died right there had he said that! He decided that it was tantamount to joking with an airport security guard about having a bomb, and thought better of it. The guy was nice enough that Im sure he would have appreciated the humor, but thank goodness we didnt have to find out!

We arrived at our campground at dusk and knew we would be leaving in the morning. It was in a very run-down area and what a dump! It was more a trailer park than the RV Resort it boasted in the travel book. There was no cable TV (yes, a prerequisite until we get the satellite hooked up) and there was no water in the pool! It was 87 when we got here at 7pm! How can you not have water in the pool? The place was dirty and, after only being outside long enough to hook up the rig, we both felt like we have bugs crawling on us. We didnt, of course, but the mind plays powerful tricks sometimes. After being serenaded by the south-of-the-border music across the way, and the screaming baby in the space next to us, we decided to find a new place in the morning. And I have to give it up to my husband who drove the entire 7 hours from San Diego to PHX. Thank you Baby Love!

We moved to a new campground today, and this one is really nice. They actually have water in the pool! Its only a few blocks away from the other one, but its a world away as far as maintenance and amenities! I guess were becoming campground snobs! This one has trees and landscaping, and an office that actually has someone working in it. The rigs are nicer here too. Two interesting things that we hadnt encountered before are the age requirements for both guests and RVs in most parks here. The 55 and older age requirement makes sense to me, but the age of your rig? Most parks will not accept rigs that are older than 10 years. I wonder why? Anyway, well be here until Tuesday. And my wish for warmer weather has been granted. It was 97 today and my hit triple digits tomorrow. OK from 55 in LA to 75 in San Diego to 95 in Phoenix. At this rate Ill be Texas toast by the time we hit Dallas. As my mother used to say, be careful what you wish for!

12 tourist places of Pinal de Amoles, Queretaro you should know

Pinal de Amoles is one of the 18 municipalities of the state of Querétaro, in Mexico. In Pinal, the so-called Read more

Checking out this travel site!
Cheap Hotels in Bali, Indonesia